One of the most well-known and endearing part of the Cathedral of Barcelona is the crypt of Saint Eulalia. The magnificent Gothic tomb incorporates Romanesque elements from other sources, such as the bases and capitals holding up the structure of the polychromed marble sarcophagus solemnly inaugurated in 1339. The sculptor is known to have come from the region of Pisa.

We know that in 1327 the bishop of Barcelona, Poncio de Gualba, contracted the services of an artist from Pisa to embellish the Cathedral that was being built during the first decades of the 14th century. There is also evidence that Luppo di Francesco was in Barcelona between 1330 and 1340. Additionally, the style of the sarcophagus coincides completely with other works by that artist at the Cathedral in Pisa.

The episodes shown in the reliefs on the sarcophagus narrate the story of the martyrdom of Saint Eulalia after leaving her parents’ home in Sarria at the age of 13, according to tradition. The reliefs also show the discovery and first transfer of the relics of the Saint from the basilica of Santa María del Mar to the Cathedral. Her martyrdom occurred within the context of the ferocious religious persecution decreed by the Roman Emperor Diocletian, and carried out in Hispania in 304 by the prefect Dacian.

The two stories go from left to right and start at the narrowest part at the left. In the first episode, the young woman is talking to her parents and we then see her walking by herself. In the long central section there are three scenes: first is her trial, in which she is condemned by the prefect Dacian; then her martyrdom by whipping and, third, her martyrdom by tearing her flesh with a hook while she was on the cross. The narrow segment on the right represents the death of the Saint on the cross. And on the long rear section are: first, the search for her burial place, the subsequent transfer of her body, carried on the back of clerics and, finally, the pause by the funeral procession so that a cleric could replace the finger that he had recently stolen from the Saint’s right hand, making the body become so heavy that it could not be moved. And on the front of the cover is the scene of the transfer to the current crypt in 1339, depicting the king and four bishops looking in awe at the body of the Saint before it is placed in the sepulcher.

Finally, the sarcophagus is crowned by five images: four angels with candlesticks and, in the center, the image of the Virgin. The crypt has a keystone representing the Virgin, Saint Eulalia and the Christ Child placing a crown on the Saint of Barcelona.

Behind the Gothic sepulcher is the original sepulcher of Saint Eulalia, which was found by the bishop Frodoino in 878 in the cemetery of Santa María del Mar, and a piece of broken marble with the original inscription commemorating her. 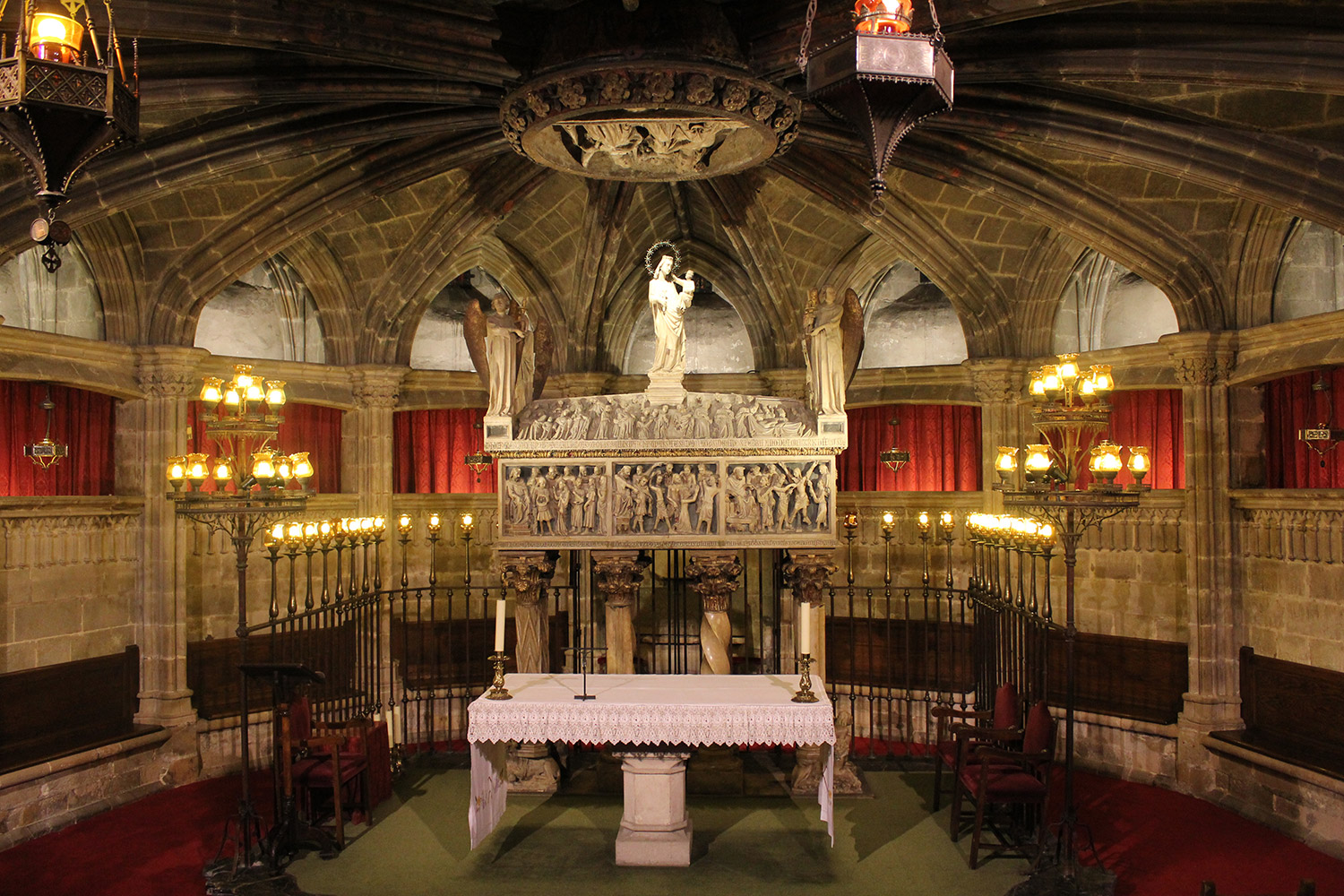